Let me preface this, I don’t know the WHOLE truth about loss.  Frankly, I’m not even entirely sure what MY truth about loss is but I’ve been spending the last few weeks really trying to figure it out.  On June 21st, 2019, I lost something that was so much a part of me that I’m pretty sure a part of me left with him and since then, time has flown by but seemingly stood still. I’ve drafted so many different explanations and justifications for what I was feeling and how I was coping so that my friends, my family and everyone else could understand me.  But, despite all these drafts, I haven’t finished any of them. The thing is I haven’t been able to get to the ending.  I haven’t been able to write the conclusion, to tie it up in a nice little bow, and although I’ve heard it doesn’t always have to end that way, I can’t figure out how to stop writing without it.

Let me start at the beginning and throw it back to about eleven years ago.  I was a few weeks from 21, living on the 4th floor of a Chicago flat with three of my college girlfriends and I decided I was getting a dog.  Our lease specifically said “no dogs,” but I got him anyway. See, from the moment I saw the goofy brindle puppy that wasn’t quick enough to keep up with his brothers and sisters, tripping over his own paws and wanted nothing to do with me, I was hooked. What can I say? Me gusta la mala vida.  I knew the clumsy, not into people, would rather be alone, pup was made for me. And if there’s one thing I know the real truth about–it’s that he was in fact made for me, by science, evolution or whatever God you believe in, me and him were meant to find each other.

Through undergrad, law school, the bar and my first years of practice he remained my loyal constant.  One house and 5 apartments later, he didn’t care if it was acres of grass to run freely or an apartment with no air conditioning, he was with me as long as I was with him.

He listened faithfully to my early 20’s drama and my late 20’s fears and constant second-guessing.  He never walked away or chose someone else and always met me excitedly when I got home.  I had no idea what I was doing and made most things up as we went, but he trusted I’d figure it out–and if he ever doubted me, he never let on.

I taught him to nap like your life depended on it, and he reminded me to get up, get some fresh air and have a meal and some water. He inherited my hate for the cold and the rain and refused to leave the house if there was even a threat of precipitation, I admired his commitment. He taught me patience and the importance of finding the ray of sun shining through the curtains even on the rainiest of days, and I tried to remember to embrace that point of view. I showed him the importance of a warm bath and a good towel dry, he made the shower his favorite spot when he needed some alone time. I moved, he came with. I was scared to jump, he reminded me I wasn’t alone. I was nervous about moving to a new neighborhood–5 different times–he never let me walk alone. I told him all of my secrets and he saw all of my mistakes and short-comings and chose me anyway. I wasn’t sure if my boyfriend would fit in with our life, he showed me you’re never too old to make a new friend. I was always afraid I’d end up alone, he stayed with me until he made sure I wasn’t. He got sick and we tried to get him better, really hard. He showed me he couldn’t do it and about 2 months ago, we all said goodbye. 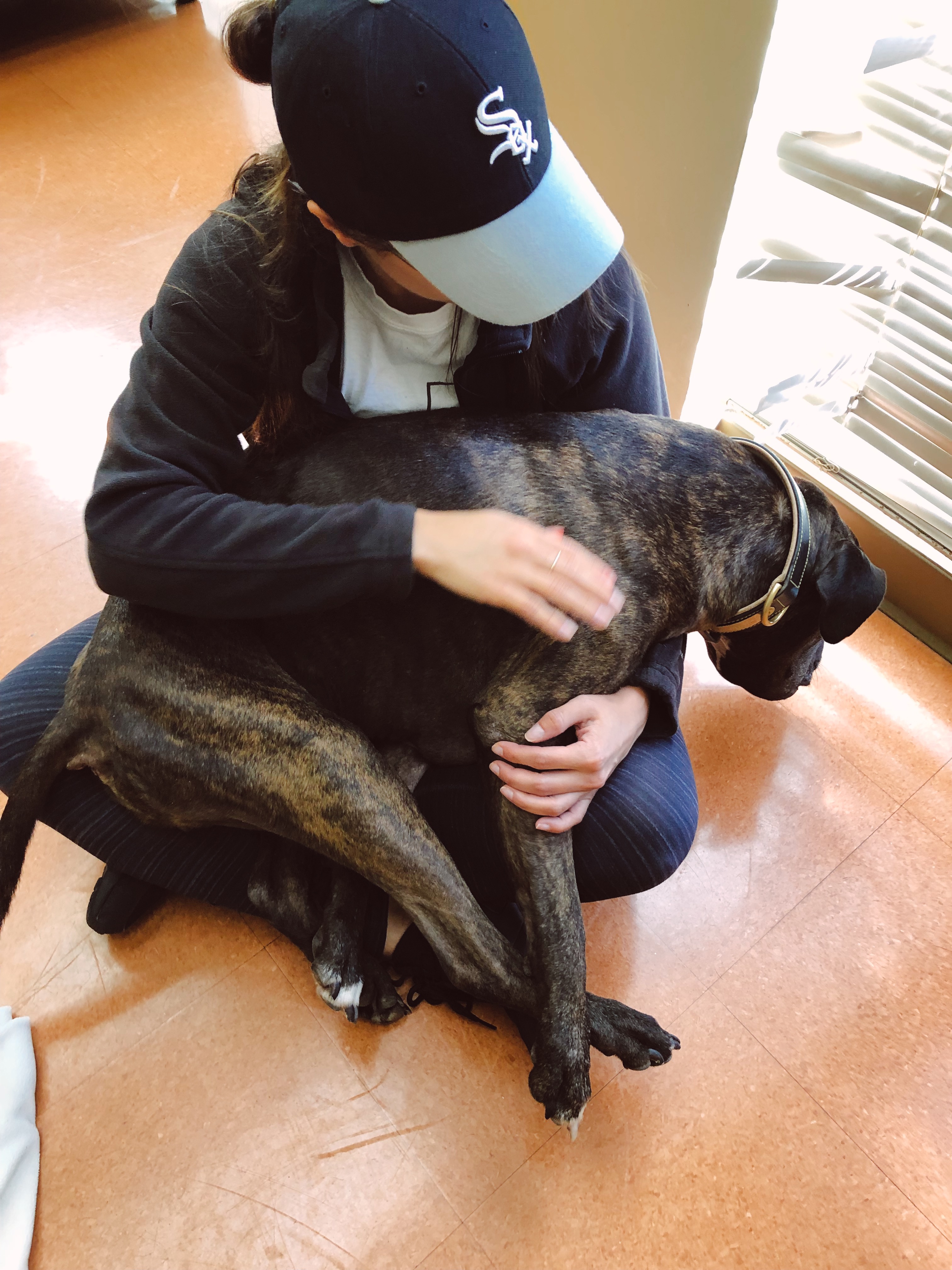 I don’t know the truth about loss, but I know that losing him was the rock bottom of a place I haven’t seen in a while.  I’m not sure what your truth about loss is, but I know mine makes everything a shade of grey, sounds like Charlie Brown’s teacher and feels numb and outrageously heavy all at the same time.  I know mine makes it hard for me to feel anything that doesn’t drag me down and I know that I’ve never gotten through mine without my buddy by my side. 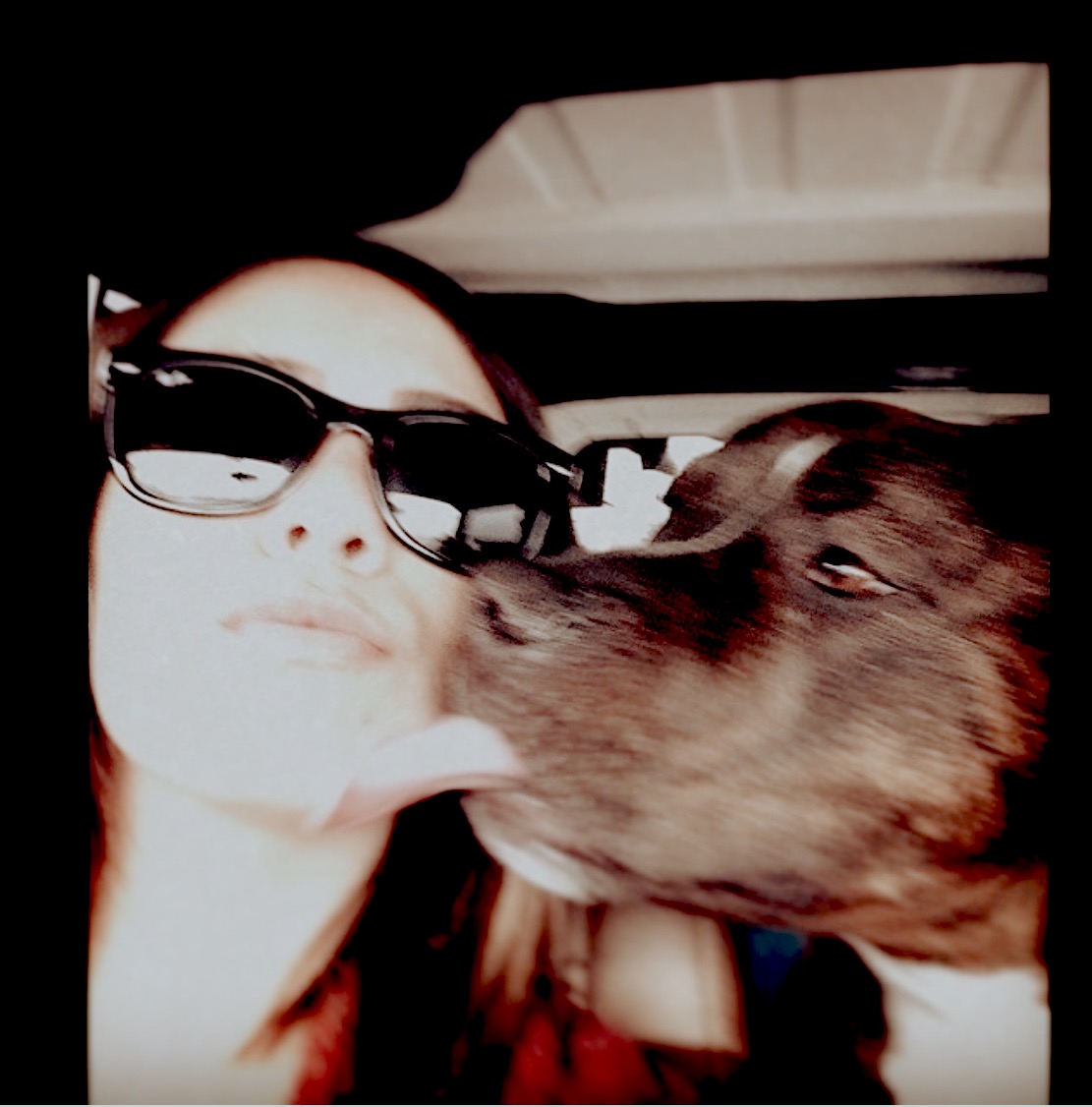 I know that this time it feels heavier, darker and more hopeless than before.  I know that it feels scary and unsteady and makes me question every thought and decision.  I know that it feels terribly lonely when I open the door, walk to my bed or remember there’s no one at home waiting for a walk.  I know that I work more, drag out my days and avoid being home alone as much as I can. I know I feel cheated and lonely that I can’t share my day with my friend. I know that no matter how many examples I write or stories I tell, that no one will ever understand the emptiness I feel.  I don’t know about you, but the truth about my loss is that it’s still very much here.

I don’t know the truth about your loss, and I guess I don’t know the real truth about loss either. I know my truth. I know it’s heavy and dark and sometimes feels like quicksand if I let myself be still for too long.  I know I’ll always expect to hear your paws when I open a door. I’ll expect to see you staring back at me from across the room. I’ll always expect to see you sitting patiently waiting for your food. I’ll always anticipate you jumping up between my legs to find the perfect spot like you were still 10 weeks old.  I know I’ll miss the one that taught me to be selfless, the one who taught me what true, unconditional love was, the one that always found the ray of sunshine peaking through everyday. 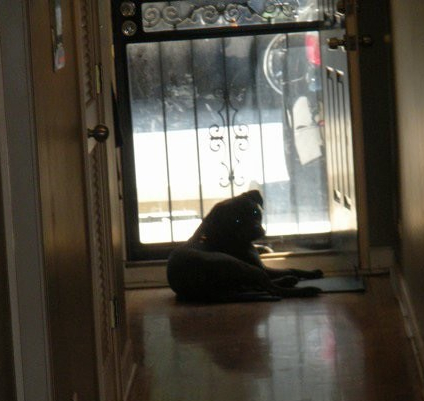 As you can see, I have been getting to know the truth about my loss pretty well.  I know it was hidden in 70 pounds of brindle fur, a line of chalk on the wet pavement that was his forehead to his nose, a hearty dash of patience for kids, a sprinkle of protectiveness, a healthy scoop of love of a warm shower and equal amounts addiction to the filet your dog dad would make for dinner.  My loss manifested when the one who always followed me to bed, never walked too far ahead and never missed a Saturday Snooze suddenly up and left.

I’m not sure what the truth about loss is.  I don’t know how long it lasts, if it gets better, easier, more forgettable, less painful, brighter, less numb, more open, lighter, less suffocating, more smiley, and less randomly cry-y. I know it’s made me question a million times over if I made the right decision at the right time. I know I’m not sure if you appreciated or hated the effort in the end and I can’t stop asking myself if you heard all of the things I was thanking you for in my head when I held you as you passed.

Truthfully, I only know things about MY loss. The truth is I’m not sure if I’ll ever find the place to put the perfectly tied bow to wrap up your story. But I think that’s fitting, because your life will live on in me because without you, I wouldn’t be 31 year-old me.  As I told you for 11 years, “If there’s a life after this one, I promise I will find you there too,” because the truth about my loss is that my heart will always look for you and hanging on to that piece of hope is going to have to be the perfectly, tied bow.

2 thoughts on “The Real Truth About Loss”