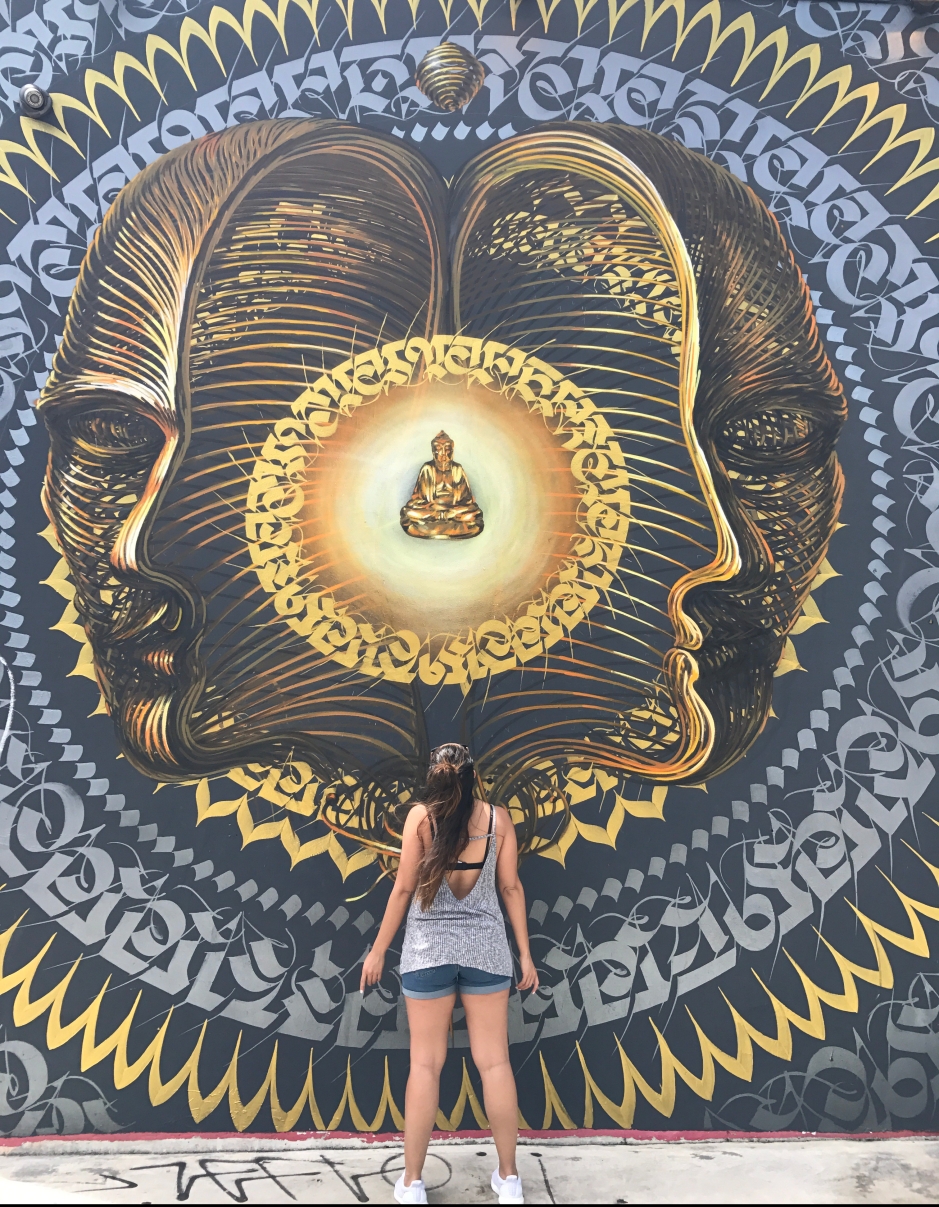 Sometimes when I’m really angry I get on social media and I wait… I wait to see the racism, sexism, classicism, homophobia, transphobia, and all of the other “issms” and phobias to rear their heads. I simply wait. I wait for the comments to pop up on my feed and read what the kid-now adult-I went to high school with, and his sister, and their Dad’s cousin’s to comment on a news article that the white guy who killed his pregnant wife and two kids is not as abhorrent of a crime because he was born here. Going on about how unfortunately there’s nothing to be done about that situation, but how THAT is very different from the undocumented immigrant who confessed to killing the white girl in Iowa. It’s SO DIFFERENT because he was here “illegally” and IF he hadn’t been here “ILLEGALLY” then that murder would not have happened.  Because for some reason after statistics and logic tell us that white men are over-represented as perpetrators of violent crime, when a brown, black or undocumented person commits it, well then it could have been avoided and so they shouldn’t be here and we should get back to building that wall or passing that ban… So, sometimes I get on social media when I’m angry…and I wait.  (spoiler alert: yes guys the white guy did it…again).

On other days, I don’t.  On these days when the posts are too much and there are too many crying kids in prison-like facilities, confused at the language they’re hearing and the strangers they’re around, and the dirt that’s building on their bodies-on those days, I make myself stay off social media.  Because sometimes seeing the capsized, makeshift rafts that refugees used as boats to cross oceans with their children risking drowning to escape their horrors is too much. Because sometimes, seeing babies drowned on white beaches and then seeing Tim from Indiana’s comment underneath, “they believed in sharia law, is that what you want in your country?!” “They should blame their parents for making that decision,” “We need to take care of our country first!” is just too much. So I stay off social media and, if I stayed off the entire day, I gift myself a bowl of flaming hots (and lemon), and I do it in the name of self-care. My red stained fingers a badge of honor known only to me.  A secret “Good Job, Melody!” to myself.  In all sincerity, I eat flaming hots after I lose my shit on a person like Tim too–it’s still self-care.

But then there are days. Days where all of the posts push me into a daydream of being on CNN and having the producers afraid to take their fingers off the censor button because regardless of how smart and articulate I can be, I’m still this brown girl and I can best express myself when I don’t have to “watch my French” or keep my neck from snaking around. I imagine being split screen alongside ANY conservative commentator and reminding them exactly why what I come from made America great way before it was an acronym on a poorly made hat. And sometimes, when I’m feeling really racy I imagine it’s Tami “that’s not my name” Lahren.  Those are the days I fight with the devil on my shoulder until I shut my eyes for the night to stay the fuck off social media.

Then there are those days, those days when my friend’s lists decrease and my family one too because you decided to comment that “racism isn’t real” and “they should just listen to the police!” and “If women want to be safe then they need to be smarter and not drink or run or walk to their cars alone.” Those are the days where you might catch me on my social media tip and you might flip positions too.

You might decide it was too much and block the thread. You might block my posts. You might even click the unfriend or unfollow button, maybe even the one in real life too. But I’ll still be on my social media tip. I’ll still be in restaurants hoping someone’s friend doesn’t make a racist comment at dinner and I have to spend my two free hours before bed reminding him that I am THAT kind of Mexican and that Black Lives do in fact Matter.

I’ll still be here denouncing people and ideas when I see or hear ignorance in real life or on social media.  I’ll still be challenging, reading, learning, and trying to be a better version of who I was before. I’ll still be pushing, donating, volunteering, and supporting men, women and non-binaries that are under-represented because I AM HERE.

So be annoyed, be an unfriend but I’m still here. I’m the gnat you can’t kill screaming, “Women get paid at most 75% of what men get paid and women have to pay more for things they need like tampons!” So the next time you see “click here to see 274 comments” with my name all over it, don’t scroll past it. Read it. Don’t hit me with the “I didn’t post this to argue,” because as long as I’m here, I’m doing my due diligence the best way I know how and a lot of the times that’ll be right here or on all different types of social media…

So, appreciate the fire and challenge yourself to understand the movement. In the meantime I’LL BE RIGHT HERE. My best friend is brown, and she’s Muslim too.

She’s brown like me and speaks Spanish too.  She’s a little sister, an aunt and a daughter.  She comes from a family that immigrated to the US too.

She fills out pages of applications and writes briefs for immigrants who look like me and you. Oh yeah she’s an attorney, probably better than me too.

She fights for people who are here and have no where else to go if their applications are denied.

She tosses and turns when she can’t get it done fast enough and she chose this path even when she knew she could likely never do enough.

She cries when she feels helpless and when Trump passes executive orders too, but she’s brown and she’s strong, and she’s a Muslim too.

I met her parents and they were kind and welcoming.  Her mom hugged me and took my bag and the first thing she asked me was if I wanted something to eat.  “You’ve been working all day, you must be starving.”

Leave it to a brown Mom to make sure there’s not a need left for her to meet. She’s a doctor who’s witty and fashionable too.

She asked me about an ex-boyfriend I had and knew that I lived with him too.

And then she asked me about the new one and she didn’t flinch when I said he was Jewish too.

She’s a mom probably better than the one you have too because she refused to share a practice with her husband because she’s brown and strong and independent too.

Her dad sat in the living room and waved from his afar he was just like my dad watching soccer too.

He told us about growing up in Abu Dhabi and the killings he saw on the street.  When my best friend expressed surprise he told her, “Oh baba for you I used to keep it sweet.”

You’re older now, I can tell you the truth…he sat around and chatted with us he’s brown, and Muslim too.

My best friend’s dad saved a man once while on vacation.  The man was white and almost drowned choking on seaweed.

Her dad ran over, heart condition and all, the only doctor who responded and gave him mouth to mouth.  He saved that man right there on beach, his boyfriend thanked him…oh yeah the drowner was gay too.

But this didn’t stop Dr. B because this was something larger than him.  He’s a doctor and he’s strong and he’s a Muslim too.

My best friend’s sister…you guessed it she’s brown too.  She small and compact but tougher than anyone I ever knew.

She married a white guy and they have two kids too.  They’re kind and funny and do all the things kids love to do.  They play and they laugh and love chocolate too.

They say Jido and Grandpa and guess what?  They’re all Muslim too.

I often sit and think when being Muslim became taboo.  Was it when we decided that to be evil it had to be because you were Muslim too?

As long as I’ve been alive I’ve seen religion make people do funny things too.  Like scream, “Pro-life” and “Don’t get divorced!” but never, “Crash that plane into a tower!” too.

I see my friend and her family too and how they remind me of mine and all the things we do.

We’re both part of a group that just never really belonged but now to Muslims and Mexicans the United States is saying “SO LONG!”

We fight everyday to prove that we are just like you, you reading this who’s not brown, that we’re worthy too.

My best friend and I we talk every day, but today it’s like we ran out of things to say.

How do we comfort each other when we have no control over what’s happening.  So we mourn and we cry and let ourselves be.

But on Monday my best friend goes back to work.  And she talks to her clients and she weeds through the murk.  She uses her steady voice that she taught me so much about–and reminds me to stay tough and strong and not let this thing take us out.

My best friend is strong, independent and brown.

My best friend is tough and she isn’t afraid of taking on this order too.

She speaks Spanish and Arabic and is trying out a few others too.

She loves to eat and laugh and learn about other cultures too.  Her favorite city is Damascus because her family hails from Syria too.  And guess what?  On top of all of that, she’s Muslim too.